The case against Soutphommasane - who is really tolerant?


Soutphommasane, pictured below, is an academic and journalist who writes as an apologist for Islam in the Melbourne tabloid newspaper "the Age". 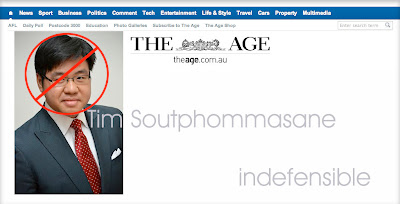 1) by way of his condemning critics of Islam who differentiate between an idea and an individual holding an idea, defames judges by calling their reasoning racist;
2) supports Female Genital Mutilation, which is banned by the UN, and which is actively campaigned against by the World Health Organisation, and on which Geert Wilders spoke out against;
3) praises the violent actions of objectors to Geert Wilders who pushed to the ground prospective attendees to his lecture in which Soutphommasane deems such actions to be a demonstration of "tolerance".

The Soutphommasane article appeared in Melbourne's Age newspaper 25/2/2013, and, in part, reads:

… the virtue of toleration [is to] put it plainly [that] we have to put up with things we may find repugnant. We have to tolerate the intolerable.

For the vast majority of us, Wilders' views belong to this category. He believes Islam is ''a dangerous totalitarian ideology'' that is incompatible with liberal freedom. The prophet Muhammad was, he argues, ''a warlord, terrorist and paedophile''.
According to Wilders…[a]ny accommodation of Islam will ultimately deprive us of ''our freedom, our identity, our democracy, our rule of law, and all our liberties''.
Not nearly enough has been said about our liberal toleration of Wilders.
For all of their talk about liberal freedoms, Wilders and his ilk are profoundly illiberal. They endorse free speech, but fail to accept this means those who disagree with them have the freedom to denounce them too. They speak highly of a free society, yet forget that a liberal state must not dictate its citizens' religious convictions.
Let's not mince words. Wilders and his... supporters are proponents of a thinly veiled form of racism. It's the sort you hear from the sly bigot who says he hates Asians or Jews or Muslims - but only in the abstract.

The Age describes their author as a "philosopher", despite his hopelessly flawed "logic". I begin with "tolerance".

Toleration of the intolerable is to be intolerant; that is, only an intolerant person will tolerate intolerance.

Karl Popper, unlike Soutphommasane, is a genuine philosopher.


ON ISLAM
Soutphommasane is condemning as "Wilder's view" a description of Islam and Mohammed that is in no way divergent from any accepted description, including that found on the government supported Islamic websites.

Soutphommasane declares Wilders "vile" for describing Mohammed as a "warlord". According to the Wikipedia (cited because it is readily available to anyone): "Muhammad (Arabic: محمد‎), was a religious, political, and military leader...". It is not Wilder's view to describe Mohammed as a "warlord"; it is what Mohammed actually was, and it is undisputed. 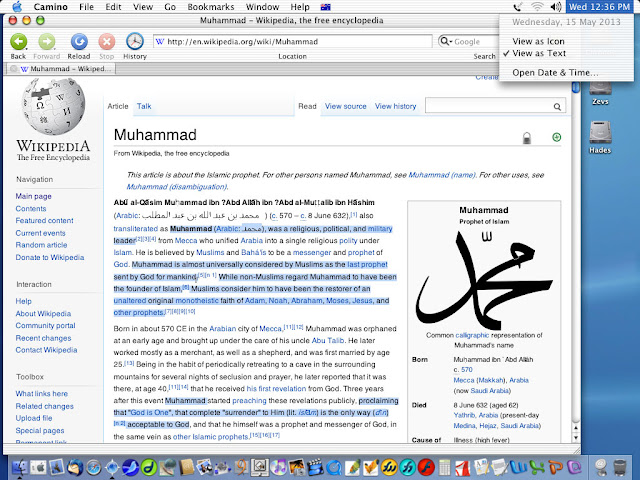 Soutphommasane declares Wilders "vile" for describing Islam as a "total system" ("totalitarian"). Again from the Wikipedia:

"Sharia (Arabic: شريعة‎ šarīʿah, IPA: [ʃaˈriːʕa], 'legislation'; sp. shariah, sharīʿah; also قانون إسلامي qānūn ʾIslāmī) is the ... religious law of Islam. Sharia deals with many topics addressed by secular law, including crime, politics, and economics, as well as personal matters such as sexual intercourse, hygiene, diet, prayer, and fasting. [and] is considered the infallible law of God—as opposed to the human interpretation of the laws (fiqh). There are two primary sources of sharia law: the precepts set forth in the Quran, and the example set by the Islamic prophet Muhammad in the Sunnah."


It is not Wilder's view that Islam is a TOTAL system; it is known to be total and this is not in dispute.

Soutphommasane declares Wilders "vile" for describing Mohammed as a "pedophile" (which I do not think Wilders did on this occasion). As for Mohammed being a "pedophile", again from the Wikipedia:


"According to traditional sources, Aisha [one of Mohammed's wives] was six or seven years old when she was betrothed to Muhammad and nine when the marriage was consummated..."


Mohammed's marriage to a prepubescent girl and consummation of his marriage to her is a recurring element in the hadith (see below). 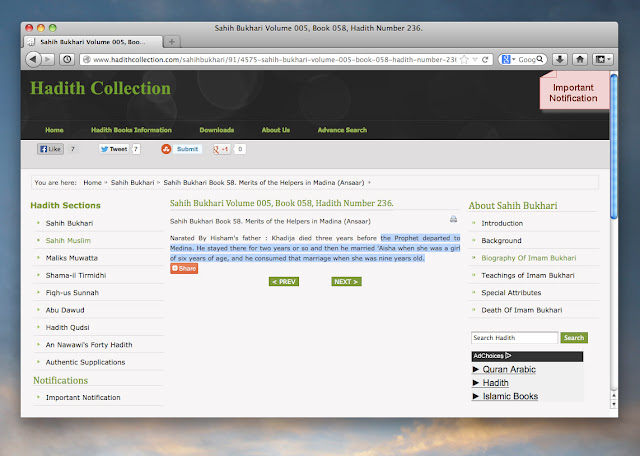 And Soutphommasane should have no difficulty in accessing the hadith in printed form;  they are studied at Monash University, the university he is associated with, see below 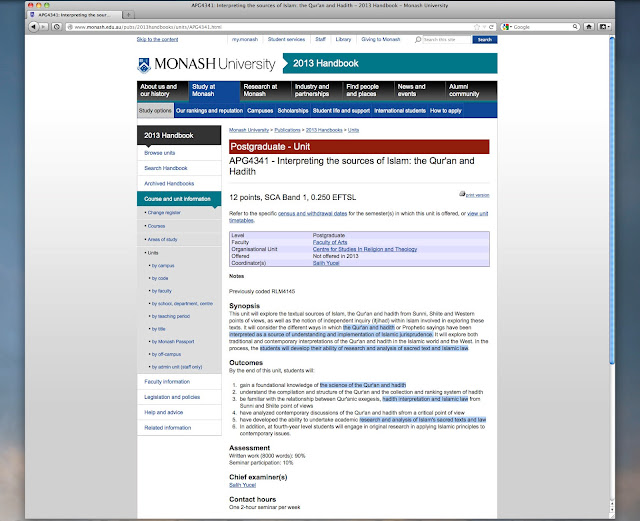 According to the DSM the Diagnostic and Statistical Manual of Mental Disorders, Mohammed would qualify as a pedophile, see below. 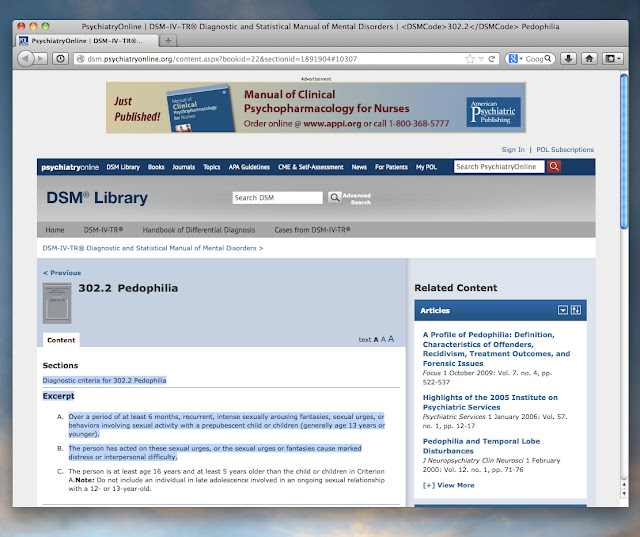 According to Soutphommasane Wilders, by simply saying nothing more than what is already known, which is not in dispute, and which is repeated in, for instance sources such as the the Wikipedia, is "hateful" and "illiberal" and "vile"! If Wilders can be declared vile, then so too should that epithet be used to describe the Wikipedia.


As Soutphommasane intends to prevent commentary on what  he does not want to be known or want to be discussed, his article is intended to suppress liberal freedoms he claims to be celebrating by defaming any prospective critic.

ON TOLERANCE OF CRITICISM AND "LIBERALISM"


This really makes no sense. Soutphommasane states: "Wilders and his ilk are profoundly illiberal...but fail to  accept this means those who disagree with them have the freedom to denounce them too."


No supporter of Wilders has demanded the right to spare Wilders from criticisim. Soutphommasane fails to provide substance to this bizarre statement. Those who attended the Wilders convention were prevented from entering, were grabbed and wrestled to the ground, were pushed, physically assailed, had their tickets taken from them, in order to intimidate them and prevent them from exercising their right to the freedom to hold an opinion or to impart and receive information.

ON VEILED "RACISM" BY CRITICISING IDEAS


In 2006 the Supreme Court of Victoria established that the criticism of an idea held by an individual cannot be said to vilify the person holding that idea as it would create an impossible burden to any right to criticise any ideas at all and would therefore limit free speech.

Justice Geoffrey Nettle asked:
"There must be intellectually a distinction between the ideas and those who hold them...Are you saying it's impossible to incite hatred against a religion without also inciting hatred against people who hold it?" (The Age, 22/8/2006)

In the judgement given, the judges decided on the question thus:
"33 ... It is essential to keep the distinction between the hatred of beliefs and the hatred of their adherents steadily in view." (Judgement available on Austlii)
Meaning that criticism of Islam, is a separate issue.

Tim Soutphommasane's illogical premise is that we should not criticise ideas as a matter of "tolerance" and supports a restriction of the rights to criticise ideas. On the absence of a complaint being made to the state Human Rights commission he then claims that it is a demonstration of "our tolerant society" that allows for the criticism of ideas. The problem with Soutphommasane's bizarre assertion here is that there is no legal basis for any complaint to have been made at all because of the 2006 ruling; no complaint could have been made!

And it is with reference to the 2006 ruling, that it was found that  there must be a distinction between the ideas held by an individual and the individual holding them. Criticism of Islam, its doctrines, is legitimate, and it does not equate to a veiled hatred of Muslims.

Soutphommasane is imputing that Justices NETTLE, ASHLEY and NEAVE, JJ.A, are racists who propounded their judgement as a thinly veiled form of racism by making the same "veiled" racist distinction!

Notes
Soutphommasane is a "political philosopher" from Monash University (below). 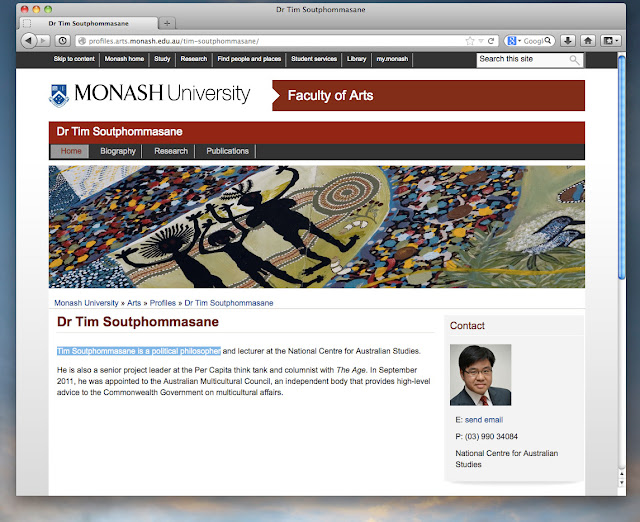 As is pointed out by Melbourne journalist, Andrew Bolt,  Monash University has a history of supporting racists who hate Jews (below). Perversely, those whose religious doctrine is nothing but hatred, and who propound and incite the hatred demanded by their religious doctrine are beyond criticism. However, those who criticise the hatred of the religious are denounced as hateful for doing so. 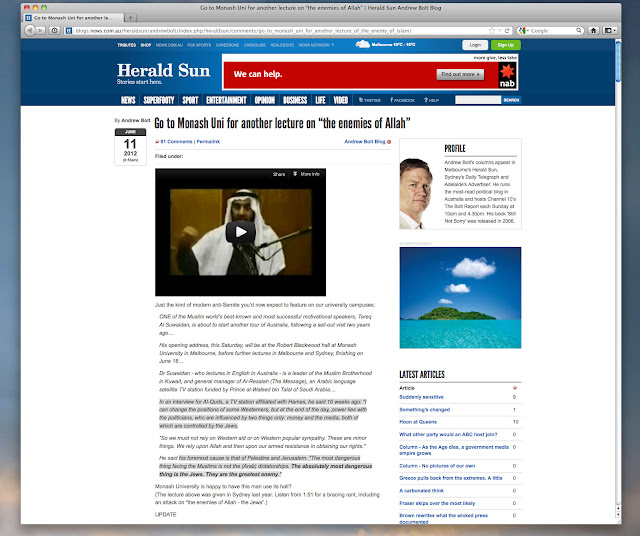 Wilders did nothing more than confirm what was presented in the UK documentary Undercover Mosque. In this documentary recorded secretly in UK  mosques, Muslims supported the ideas that Wilders identified and was criticised and over which he was called “racist”. In the UK the documentary producers were charged with defamation. The Crown Prosecutors who took the documentary makers to court on behalf of the "aggrieved" Muslims were forced to retract their claim and apologise to the documentary makers.

(Note: for whatever reason, "Blogger" has taken over some font sizes! and I have no control over them!)