The Left against the Jews

Since September 11 2001, an atheist who would previously have been described as "leftist" (or "liberal" if they were American) found that they were suddenly cast as "right-wing" or "far-right" and "racist" if their criticism of religion included criticism of Islam.

This essay is written because I am impelled, whether I like it or not, to demonstrate how those who uncritically support the "Palestinian" cause against Israel unavoidably come to expose their own racism and augment the historical racism which continues to call for the genocide of Jews. Hitler called for such a genocide in the name of Christianity, and the contemporary (political) left support the same call being made in the name of the religion of Islam.

In 2009 in an art exhibition Humanist Transhumanist I criticised religion-derived values and quoted from religious doctrine - the New Testament, Old Testament, Koran - arguing that we must arrive at our human values by the application of reason. I was called "racist" because I quoted the Koran, apparently because it is insensitive to the cause of "Palestinians" where "Palestine", Israel, or the conflict in the Levant was never mentioned. The gallery owner who called me "racist", Robert Cripps, subsequently decided to sue me for defamation because I wrote about what he did to myself and co-exhibitor, and the actions that he used against us based on his claim of "racism" that were used as an excuse for a rescission of the contract I had with his gallery.

The Students for Palestine champion the cause of "Palestinians", a people who are defined as Arab by race and Muslim by religion.

In support of a Muslim Arab cause, "Palestine", it becomes a corollary to condemn any critic of Islam, even where "Palestine" is not mentioned.

Since 1951 Genocide has been recognised as crime against humanity.

(Wikipedia quote. The 1948 resolution is available on the UN website).

Article 18 of the Universal Declaration of Human Rights protects freedom of religion.


This poses an obvious conundrum:

- unhindered right to observe one's religion which includes the committing of genocide guaranteed by the UN?

- or the right not to be exterminated, also guaranteed by the UN?


To prevent the "conundrum" it is far easier to call critics of Islam racist so that you do not have to be called to adjudicate, or be compelled to have to legislate and impose a restriction to religious worship, which includes the right to commit genocide, since this is part of the religion.

When hadith calling for genocide against the Jews are referred to it is apparently not Islam that is racist, but who-ever brings Islam to the attention of another!

By this means those who support the cause of "Palestinians" - which is to commit the genocide of the Jews - can blame the Jews for their own genocide. This method was used by Hitler who claimed that his war (WW2) was a defence against Jews. The Arab Muslim Nazi al Husseini, associate of Hitler, too blamed the Jews for their being exterminated:


"In 1954, Husseini wrote that 'our battle' was 'with World Jewery' and its colonialist allies. … In postwar Cairo, Husseini wrote...: '[the Jews] did whatever they could to lead to its [Germany's] destruction. This is the main reason for Hitler's war against Jews and for his strong antipathy toward them. They brought disaster upon Germany and led to its defeat, although Germany was the most powerful nation, from a military point of view. Germany's revenge against the Jews was harsh, and it annihilated millions of them during the Second World War. In this way, the Jew's aspirations in Palestine and their acts against Germany during the First World War aimed at achieving the Balfour Declaration, became the main reason for the disaster that befell them during the Second World War.'" p. xiv, Herf


Condemning critics of Islam is a necessity for those who support "Palestinians". Supporters of "Palestinians" seek to prevent knowledge of Islam's call for the genocide of Jews so that they can blame Jews. And any critic of Islam is, by this necessity, denigrated in order to silence them.


Any mention of the Koran or the hadith, that show unambiguously the Islamic intentions behind what is a unilaterally declared Muslim religious war against Jews, is suppressed. Anyone who supports the Palestinian cause is a racist, because the cause they support is racist. And any of the few Jews who might believe they are doing some good by supporting the “Palestinian” cause because they uncritically accept the argument that only the Jews can be blamed, are simply useful idiots. 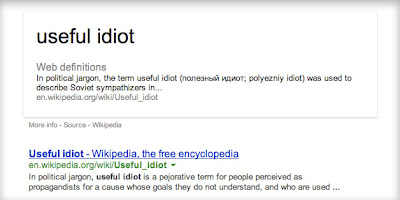 Supporters of "Palestine" criticise critics of Islam because such a critic can demonstrate incontrovertibly that the calls for genocide are an inexorable component of Islam, and central to what it is to be Muslim.


After-all, for Islam, the dead will be raised only after the complete genocide of the Jews. However, to justify their racism against Jews knowledge of Islam has to be suppressed so that war in "Palestine" can then be blamed on the victims of the violence, the Jews.

That is: Islam's objective is predicated on, and can only be achieved by, the total extermination of Jews. This is immediately obvious in Islamic doctrine. So any criticism of Islam has to be suppressed in order to blame the victims of Islam's war against them, the Jews.

The Koran is no mere holy book, it, along with the hadith is law; religious obligations required of all Muslims to submit to. Islam means submission. Proof of submission takes the form of acting on the demands made, whether they be calls to beat a disobedient wife, or calls for the genocide of the Jews.

Students for Palestine advocate, as do those whose cause they champion, the "Palestinians", the elimination of Jews. By what means? expulsion? or extermination? or are they to simply vanish?

(About) a month prior to our exhibiting at Cripps failed GLG in 2009, the Students for Palestine marched, in a protest organised at RMIT, an institution with which Cripps' gallery had extensive dealings. In 2009 Students for Palestine made the same call as did Hamas, the elimination of Israel. The call made was "Palestine from the river to the sea". Where to the Jews? This call, like Hitler's, leaves nothing to speculation, their call is to make "Palestine" Judenfrei.


There were an extraordinary number of exhibitions held at GLG run by Robert Cripps that were official RMIT functions - RMIT being where Peter Cripps, brother of Robert Cripps, works. The link between RMIT & GLG was not noticed by us alone as the above article illustrates (I am compiling a page on the many RMIT links to GLG - the links between both are overwhelmingly extensive). Both Peter Cripps and Robert Cripps have worked together in the past, as was communicated to James Gleeson by Peter Cripps in a past interview for the ANG (transcript of the interview available from ANG as a pdf). Wether Liam Ward and the Cripps brothers ever communicated with one-another is not known. RMIT includes among its academics those who act for Palestinian causes and who actively campaign against critics of Islam. That Robert Cripps expressed a view identical to this could be purely coincidental!


Early 2013. The Students for Palestine continue with the same logo used in 2009: their Facebook page includes a map of "Palestine"; a map of the British mandate of Palestine. There is no Israel. It is a map showing, to use the Nazi term, a "Palestine" that is Judenrein, cleansed of Jews, where only "Palestinians" remain.


The objective of "eliminating" the Jews from "Palestine" symbolised by maps showing it and no Israel is not isolated to Australia. In 2012 a British history book included a map of the levant in which "Occupied Palestine" is shown in place of Israel.

The map showing only "Palestine" was roundly condemned as racist. Even the publishers apologised, sort-of, but somehow absolved themselves of blame and claimed that it was because of some "miracle" (an inexplicable happening, possibly by the will of Allah?).

The UK "Palestine Solidarity Campaign", strives to achieve, as its map shows, that "Palestine" be made Judenrein (below) 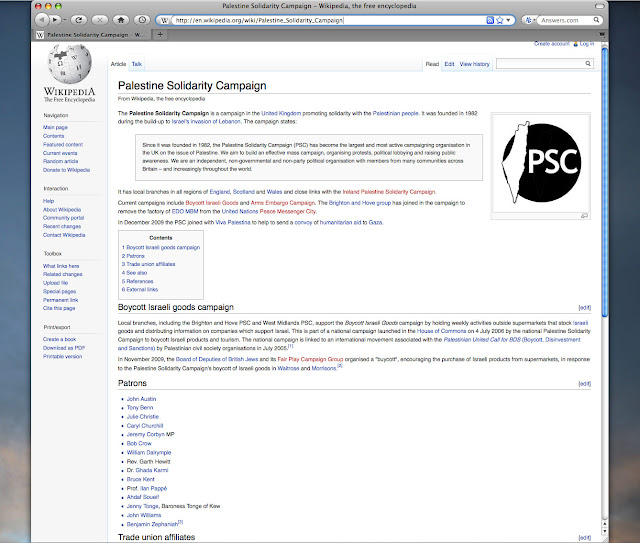 And in Palestinian territories, there is no attempt to hide what is advocated for "Palestine", which is to be the first world state to declare itself Judenfrei, a state that is free of Jews, the first state to officially prohibit Jews and other faiths: 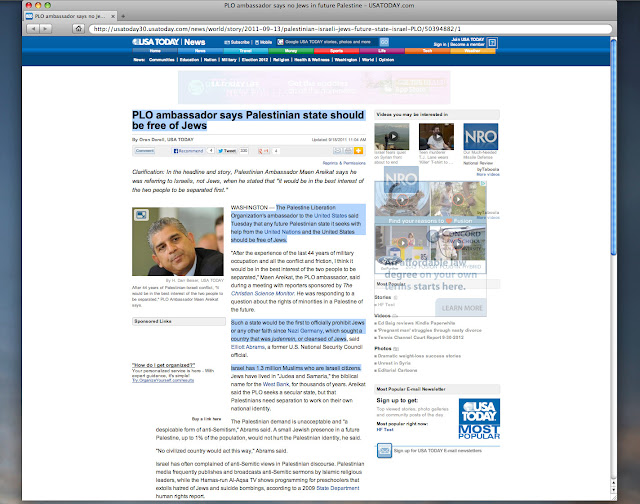 So, what's the excuse for the Students for Palestine? who make the same call for a Jew-free "Palestine" with impunity, and support their demand by using the same map where a "Palestine" exists in place of Israel? but who then claim that they are not advocating the elimination of Jews, just the rights of Palestinians? But the rights of "Palestinians" to do what? expel the Jews? exterminate the Jews? make the land Judenfrei? and all the while they can blame it all on Jews by keeping suppressed that the "Palestinian" motive is Islam, (in the same way that HItler's motive was Christian)? which demands as a compulsory religious obligation that one commit genocide of the Jews? And this they achieve by calling critics of Islam "racist", even critics who do not reference the conflict in "Palestine". Suppressing criticism of Islam is intended to achieve one thing: maintain racism against Jews.