Racist to criticise Islam - blame Israel and US Baptists

In the UK, and its colonies such as Australia, criticism of the doctrinal elements of Islam, such as the Koran or hadith, or even the presentation of quotes from those doctrinal sources is denounced as "racist".

To mitigate the accusation of "racism" in England (the UK) a number of ploys are used.  If criticism of Islam is made, this criticism has to be accompanied by a concomitant and unnecessary criticism of Jews as well, ostensibly as a demonstration of the author being even-handed in their criticism which is applied to all are de rigueur.

Such is the example of the author, Polly Toynbee,  who in 2004 complained:

"We must be free to criticise without being called racist"

"Atheists, feminists and anti-racists are paralysed by Islam."


"Muslims must also accept the right of others to criticise religions without smearing any critic as a racist." 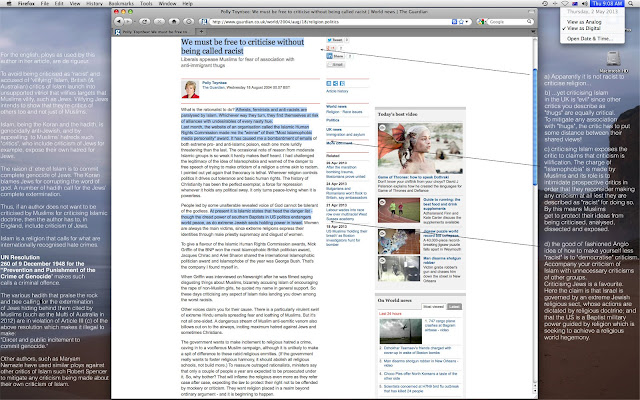 To avoid being criticised as "racist" and accused of "vilifying" Islam, British (& Australian) critics of Islam launch into unsupported vitriol that vilifies targets that Muslims vilify, such as Jews. By vilifying Jews as well as Islam, such critics intend to show that they're critics of more than just Islam.

"the dread power of southern Baptists in US politics endangers world peace, as do extreme Jewish sects holding power in Israel"


This is frankly bizarre. There is nothing in Jewish religion, or in Christian doctrine that calls for war against Islam. The Koran though demands a war of annihilation; and it is to be waged against non-Muslims until we are all Muslim and submit.

"Fight against such of those to whom Scriptures were given as believe neither Allah nor the Last Day, who do not forbid what Allah and His apostle have forbidden, and do not embrace the true faith, until they pay tribute out of hand and are utterly subdued."  Koran, Repentance, 9 :29 Dawood translation


The hadith call for the complete genocide of the Jews as a mandatory prerequisite for Judgement Day.

Islam, being the Koran and the hadith, is genocidally anti-Jewish, and by appealing  to Muslims' hatreds such "critics", who include criticism of Jews for example, expose that they too hold a racist hatred for Jews.

The raison d' etre of Islam is to commit complete genocide of Jews. The Koran blames Jews for corrupting the word of god and that they have therefore forfeited any rights previously given to them by god. A number of hadith call for the Jews' complete extermination as a necessary precursor for “Judgement Day”.

Thus, if an author does not want to be criticised by Muslims because they have criticised Islamic doctrine, then the author has to, in England (and Australia), include criticism of Jews.

Islam is a religion that calls for what are internationally recognised hate crimes (refer genocide hadith).

UN Resolution 260 of 9 December 1948 for the "Prevention and Punishment of the Crime of Genocide" makes such calls a criminal offence.

The various hadith that praise the rock and tree calling for the extermination of Jews hiding behind them cited by Muslims (such as the Mufti of Australia in
2012) are in violation of Article III (c) of the above resolution which makes it illegal to make:
"Dircet and public incitement to
commit genocide."

Other authors, such as Maryam Namazie have used similar ploys against other critics of Islam such Robert Spencer to mitigate any criticism being made about their own criticism of Islam.